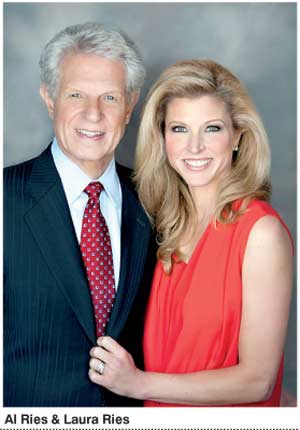 World renowned branding guru and positioning expert Al Ries will be the keynote speaker at the 15th CIM Annual Conference in Colombo on 12 May. Al Ries will be joined with daughter and business partner, Laura Ries along with a stellar cast of local experts at the conference.
Al and Laura have been working together as focusing consultants for 18 years. Ries & Ries was founded in New York in 1994. Three years later, they relocated in Atlanta, Georgia.

Al first rose to fame when a series of three articles on a new concept called ‘Positioning’ authored by Al Ries and Jack Trout appeared in Advertising Age in 1972. The positioning idea took the ad world by storm and was voted by AdAge as one of the 75 most important advertising ideas of the past 75 years. In 1981, the ‘Positioning’ book was published and has since sold well over one million copies. The book has sold over 400,000 in China alone. The two authors also wrote Marketing Warfare, Bottom-Up Marketing, Horse Sense and The 22 Immutable Laws of Marketing.
More recently, Al and Laura have written six books together and have continued to rattle the establishment by challenging traditional conventions.  Ries & Ries books include Focus: The future of your company depends on it. This book outlines the core concept of Ries & Ries. Without focus, it’s almost impossible to build a brand no matter what other laws you follow.   The 22 Immutable Laws of Branding covers every aspect of branding from the name to the category, from expansion to contraction, from the use of PR and advertising, to the shape and colour of logotypes – it’s known as the Branding Bible. The 11 Immutable Laws of Internet Branding supplements the 22 laws by adding 11 additional laws that cover the special needs of internet brands like interactivity, proper names and divergence.

The Fall of Advertising and the Rise of PR contradicts traditional wisdom that calls for new brands to be launched with a big-bang advertising campaign; advocating PR first to establish credibility and advertising second to maintain market share.

The CIM Annual Conference is the flagship event of CIM Sri Lanka Region organised for the 15th successive year. CIM Sri Lanka is the largest overseas region of CIM UK which is the largest professional body for marketing with over 100 years of proud history. This event is facilitated by the Knowledge Partners, Kotler Impact Inc. Canada, Philip Kotler Centre for Advanced Marketing and Hummingbird International.

To Get Game - Changing Results,
Start Focusing On Innovative Thoughts.
Contact Us

Get in Touch With Us