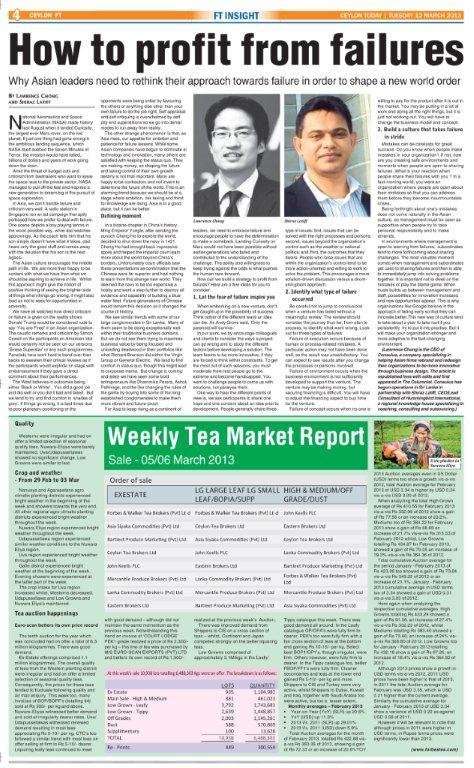 How to profit from failures!

Why Asian leaders need to rethink their approach towards failure in order to shape a new world order.

NASA made history last August when it landed Curiosity, the largest ever Mars rover, on the red planet. If just one thing had gone wrong in the ambitious landing sequence, which NASA itself dubbed the Seven Minutes of Terror, the mission would have failed, billions of dollars and years of work going down the drain.

Amid the threat of budget cuts and criticism from lawmakers who want to leave the space race to the private sector, NASA managed to pull off the feat and inspired a new generation to dream big in the pursuit of space exploration.

In Asia, we don’t handle failure and criticism very well. A radio station in Singapore ran an ad campaign that aptly portrayed how we prefer to deal with failure. One scene depicts a boy playing tennis in the worst possible way, while dad watches approvingly. As the coach tells him that his son simply doesn’t have what it takes, dad hears only the good stuff and comes away with the delusion that his son is the next Agassi.

The Asian culture encourages the middle path in life.  We are more than happy to be content with what we have than what we should be aspiring to achieve in life.  Whilst this approach might give the notion of positive thinking of seeing the brighter side of things when things go wrong, it might also lead us not to seek for opportunities in adversity.

We have all watched how direct criticism on failure is given on the reality shows.  Donald Trump would be considered rude to say ‘You are Fired’ in an Asian organization.  The caustic remarks and criticism by Simon Cowell on the participants on American Idol would certainly not be seen on our versions ‘Sirasa Superstar’ or any such programs.  Panelists here work hard to bend over their backs to sweeten their critical reviews as if the participants would explode on stage with embarrassment if they gave a direct comment about their performances.

The West believes in outcomes being either ‘Black or White’.  You did a good job and did well or you did it bad and failed.  But we tend to try and find comfort in ‘shades of grey’.  If things go wrong, it is bad times due to poor planetary positioning or the opponents were being unfair by favoring the others or anything else other than your own failure to do the job right.  Self appraisal and self critiquing is overwhelmed by self pity and superstitions so we go into denial modes to run away from reality.

The other strange phenomenon is that, as Asia rises, our appetite for ambition and patience for failure lessens. While some Asian companies have begun to dominate in technology and innovation, many others are satisfied with keeping the status quo. They are making money, so shaping the future and taking control of their own growth destiny is not that important. Many are happy to be contractors and not invent to determine the future of the world. This is an alarming trend because we should be at a stage where ambition, risk taking and thirst for knowledge are rising. Asia is in a good place, but it can be better.

In a bizarre chapter in China’s history, Ming Emperor Yongle, after sending the eunuch Cheng Ho to explore the world, decided to shut down the navy in 1421. Cheng Ho had brought back impressive spoils and helped the imperial court learn more about the world beyond China’s borders. Unfortunately court officials saw these presentations as confirmation that the Chinese were far superior and had nothing to learn from this strange new world. They deemed the navy to be too expensive a hobby and went a step further to destroy all evidence and capability of building a blue-water fleet. Future generations of Chinese would lament this decision as it changed the course of history.

We see similar trends with some of our large conglomerates in Sri Lanka.  Many of them seem to be doing exceptionally well within their traditional business domains.  But we do not see them trying to maximise business value by being focused and unloading deadwood in their portfolios like what Richard Branson did within the Virgin Group or General Electric.  We tend to find comfort in status quo, though this might lead to corporate inertia.  But change is coming and lately we have seen some bold entrepreneurs like Dhammika Perera, Ashok Pathirage, and the like changing the rules of the game by buying into some of the long established conglomerates to make them more vibrant and future-proof.

For Asia to keep rising as a continent of leaders, we need to embrace failure and encourage people to have the determination to make a comeback. Landing Curiosity on Mars would not have been possible without earlier generations who failed and contributed to the understanding of the challenge. The ability and willingness to keep trying against the odds is what pushes the human race forward.

How can we build a strategy to profit from failures? Here are a few ideas for you to consider:

1. Let the fear of failure inspire you

When embarking on a new venture, don’t get caught up in the possibility of success. Think rather of the different ways an idea can die. As Andy Grove said, “Only the paranoid will survive.”

In our work, we try encourage colleagues and clients to consider the ways a project can go wrong and to study the different factors before developing a solution. The team learns to be more innovative, if they are forced to think within constraints. To get the most out of such sessions, you must moderate them lest people go to the extreme and become handicapped. You want to challenge people to come up with solutions, not paralyse them.

One way to hear the different points of view is, we ask participants to share one hope and one concern about an idea prior to development. People generally share three type of issues: first, issues that can be solved with the right processes and persons; second, issues beyond the organisation’s control such as the weather or national politics; and third, the outcomes that they desire. People who raise issues that are within the organisation’s control tend to be more action-oriented and willing to work to solve the problem. This encourages a more solution-driven discussion versus a doom-and-gloom approach.

2. Identify what type of failure occurred

Be careful not to jump to conclusions when a venture has failed without a meaningful review. The review should consider the journey thus far, from plan to process, to identify what went wrong. Look out for three types of failures:

Failure of execution occurs because of human or process-related mistakes. A particular action may not have been done well, so the result was unsatisfactory. You can expect to see results after you change the processes or persons involved.

Failure of environment occurs when the business environment is not sufficiently developed to support the venture. The venture may be making money, but securing financing is difficult. You will have to adjust the financing aspect to buy time for the venture.

Failure of concept occurs when no one is willing to pay for the product after it is out in the market. You may be putting in a lot of work and doing all the right things, but it is just not working out. You will have to change the business model and concept.

3. Build a culture that takes failure in stride

Mistakes can be catalysts for great success. Do you know when people make mistakes in your organisation? If not, how are you creating safe environments and moments when people are open to sharing failures. What is your reaction when people share their failures with you ? In a fast-moving world, you want an organisation where people are open about their mistakes so that you can address them before they become insurmountable crises.

Being forthright about one’s mistakes does not come naturally in the Asian culture, so management must be seen as supportive when people try to take personal responsibility and to make amends.

In environments where management is open to learning from failures,  subordinates tend to more forthcoming about sharing challenges. The most valuable moment comes when management and subordinates get used to sharing failures and then is able to immediately jump into solving problems together. It is important not to dwell on the mistakes or play the blame game. When trusts builds up between management and staff, possibilities for innovation increases and new opportunities appear. This is why organisations like Google believe in the approach of failing early so that they can innovate better.This new way of culture tend to take about a year to take root if you persistently  try to put it into practise. But it will make your organisation stronger and more adaptive to the fast-changing environment.

To Get Game - Changing Results,
Start Focusing On Innovative Thoughts.
Contact Us

Get in Touch With Us